The vineyards of Santorini

The History
The cultivation of vine in Santorini goes back 3.500 years ago. Findings from the excavations of the prehistoric town of Akrotiri show that vine cultivation, wine making and wine trade were the habitants’ important activities. The volcanic eruption in the 17th century led to the extinction of every trace of human life and vegetation on the island for about three centuries. According to Herodotus, the first colonists that went to Santorini after the disaster were the Phoenicians who, as well as their followers, had to face an extreme ecosystem in order to survive. In order to meet their food needs they tried to cultivate various kinds of plants that they brought with them and with which they were familiar.

Unique terroir
Only vine managed to survive over the centuries in the inhospitable environment of Santorini. It is an easily adaptable and particularly tenacious plant as far as the hot and dry conditions of the island are concerned, while it possesses a rich and strong system of roots that penetrate the Theraic earth. The locals call “aspa” this hard, solid ground that was created by the consecutive layers of volcanic matter including ash, lava, pumice and rust, and covered the limestone and slate subsoil during the successive eruptions.

Cultivation
Centuries of human labor are stamped on the island’s landscape and prove the efforts made by the local people to hardness their land. The cultivated area begins at a height of 300 meters and the vines go all the way down to the level of the sea. The vine dressers built dry stone walls with pieces of petrified lava, in order to protect the soil form erosion caused by the strong winds that sweep across the island throughout the year, to increase the cultivable land and to limit the loss of water due to minimal rainfall.

Every process applied on the soil – ploughing, digging of pits – aims at improving the absorption of the winter’s precious rain water. In the summer, only the sea fog that covers the island cools down the thirsty plants during the morning hours. Afterwards, the strong etesian winds (“meltemia”) and the hot sun dry up the grapes from humidity, preventing the risk of developing illnesses such as mildew and botrytis. The only intervention required for protecting the plants is sulphuration that allows for the principles of organic cultivation to be applied.

“Ambelia”
In order to protect plants from strong winds and to limit their need for water, the vine growers of Santorini adapted and refined a primitive pruning technique, the “ambelia” or “kouloura”. The plants are pruned to form a low vegetable basket where grapes are protected and mature, without run the risk of being damaged by sand, which is carried by the wind.

Vines that survived from phylloxera
The fine sandy soil, poor in nutritious ingredients, with low argil content protected Santorini’s vineyards from vine louse. Today they are one of the few self rooted vineyards in Europe.

Vine growers can renew their vine yards using layers and grafting, without having the extra cost of buying grafted American rootstocks which are prone to various infections. The roots of native varieties have grown directly into the volcanic soil for many centuries.

Indigenous grape varieties
Assyrtiko, athiri, aidani, mandilaria, mavrotragano, boudomato, potamisi and gaidouria, are just a few of the approximately forty grape varieties that are cultivated on 3.706 acres of Santorini’s vineyard. The average yield per 1000 m2 is very low, nearly 350 kilos; its quality, however, is extremely high. Usually the production adds up to 4.500 tones and the total production of wine up to 3.200 tones. There are years, however, with extremely low production due to bad weather conditions.

Local grape varieties produce high quality wines that fully express Santorini’s unique ecosystem. Assyrtiko is the island’s main variety as it represents about 80% of grape production. It is a multidynamic variety with excellent adaptability to the different bioclimatic conditions. That is why its cultivation has been spread almost all over Greece. The assyrtiko variety within Santorini’s ecosystem acquires a unique expression, producing wines with metallic character, exuberant body and high content of alcohol, while at the same time they retain high acidity and freshness.

Athiri is a white variety of Cretan origin, early, aromatic and with high content of alcohol that is used mainly for mixing with assyrtiko.

The aidani variety that is cultivated in small quantities, possesses a sharp and at the same time delicate aroma and is used mainly with assyrtiko in order to add aromas to vinsanto.

Mandilaria is the foremost widespread red variety in the island as well as in the rest Aegean islands. It has a particularly vivid color, medium content of alcohol and high acidity. In many cases it is mixed with white assyrtiko for the production of dry red wines. Grapes of the mantilaria variety are traditionally dried in the sun in order to give sweet red wine.

Mavrotragano is a red indigenous variety of the Cyclades that is very acknowledged in the last few years. Its cultivation is spreading, as it produces wines with high content of alcohol, full of phenolic elements and color and has an amazing aging ability.

The wines
During the ’70s the label of VQPRD (Vin de qualité produit dans une région determinée) was lawfully awarded to dry and sweet white wines produced from the varieties of assyrtiko, athiri and aidani in the islands of Thira and Thirasia. There are three types of wine that may bear the “name of origin of top quality”.

– Nykteri, that represents the traditional type of Santorini’s white wine.It is a mature, mixed wine, with high content of alcohol, aged in a barrel for a few months. It was given this name because in the past the whole vinification procedure was carried out during the night, when the temperature was low and there was no sunlight, in order to minimize the risks of oxidization and spoiling of the product;

– The exceptional vinsanto, which is a sweet, sun dried white wine. Vinsanto is produced from very mature white grapes that are dried in the hot sun of Santorini for many days, in order to give the concentrated, sweet, golden wine with the powerful aroma of raisins, dried figs, honey, dried fruits and coffee. Vinsanto matures for many years in oak barrels and is been aged in bottles for an even longer period of time.

– Besides the Santorini P.D.O. wines, the wineries of Santorini present a very attractive collection of wine like rose, red or even sparkling wine.

Cultivating the future
The pressure resulting from Santorini’s fast growing tourist development during the past few years is big. However, the good workmanship and the knowledge of vine dressers and wine makers, who follow modern wine law and take advantage of the EU financial support in order to promote and protect the unique characteristics of the vineyards of Santorini, are securing the future of one the oldest vineyards in the world. The long vinicultural and wine making tradition is linked with the tourist development of the island.

The investments made on the wineries of Santorini are important. They are places that can be visited and be hospitable for those who wish to learn about the agricultural products of the island. Wine tasting, tours of production places and vineyards, visits to museums and traditional canavas are some of the choices that are provided to visitors and offer an unforgettable experience to travelers.

Buy your Santorini wine online from our e-shop 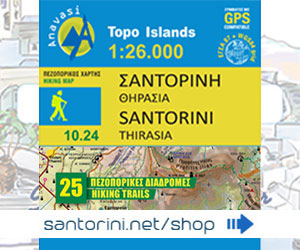