Messaria is located at a cross point of Santorini and is close to Fira (about 4 km), the airport, and the eastern beaches of the island. It is a picturesque village surrounded by tomato farms and vineyards and it dates back to the middle ages. The new part of the village is full of life, whilst a walk through the traditional settlement will take you back in time, when Messaria was the centre of the island’s industrial development. There, you will find the remains of the imposing facilities of the Markezinis knitting factory, as well as the Saliveros mansion, dome-shaped houses built into the volcanic rock, cobbled streets, many churches and the restored Argyros Mansion that evidences the glory of its time. 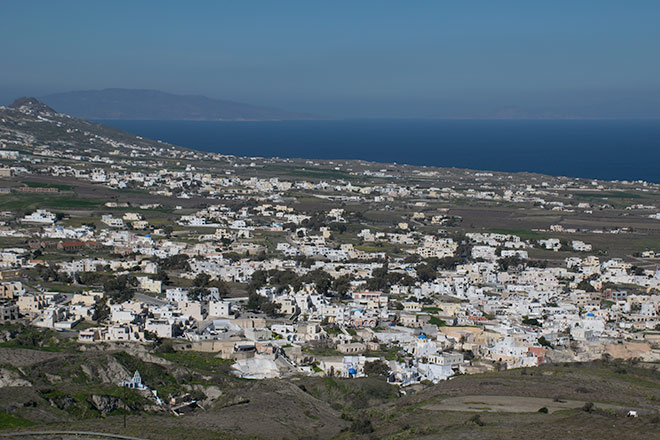 Very near to Messaria you will find Vothonas village. It is worth visiting this village to admire the distinctive folk architecture. Many buildings are built into the volcanic earth of a large gorge. These buildings were cheap to construct and offered shelter from the winds and the pirates. Park your car for a while and cross over the dried up river and the traditional little road on the river bed, in order to discover the church of Panagia Trypa or Sergena, situated high up on the rock.

Back to all Villages page
Advertisement