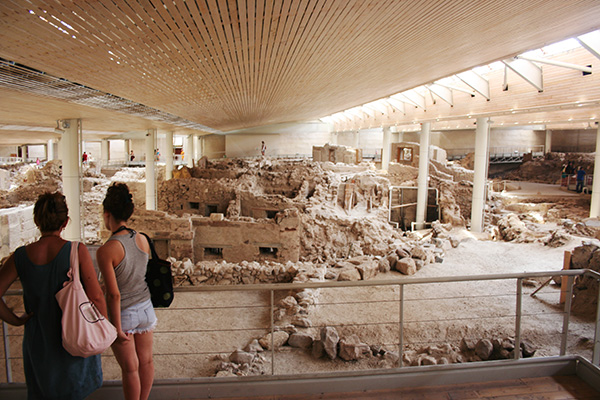 The use of Theraic land by the French engineer Ferdinand de Lesseps for the insulation of the Suez Canal lead to the discovery of prehistoric antiquities (1866), marking the beginning of archaeological research on the Cycladic islands. Small-scale excavation research was carried out three years later (1870) by the French School of Archaeology on the site of Favatas, north of the present day Akrotiri. In 1967 Spiros Marinatos inaugurated the excavation to the Bronze Age town of Akrotiri on behalf of the Archaeological Society.

Thanks to the digging up of deep pits for the foundation of columns for the new shelter, it is now possible for us to outline the history of the prehistoric settlement on the southern coast of the island. Established during the Neolithic period (during the 5th millennium B.C.), the small Neolithic village followed the development of the Cycladic civilisation of the 3rd millennium B.C. (proto-Cycladic period) and thanks to the strategic importance of its geographical location the cosmopolitan merchant harbour was built and today is admired by many visitors.

During the mid-Cycladic period (2000-1650 B.C.), the town of Akrotiri played a significant role in the transportation of commodities and in the development of metallurgical activities, making it a pioneer of progress not only in the Aegean, but in the Mediterranean in general. The material wealth created by these activities allowed the inhabitants of the town not only to survive after every catastrophe caused by a destructive earthquake, but also to rebuild and decorate the town with impressive buildings. Unique works of art that were saved in the ruins of each catastrophe constitute clear evidence of this continuous development. Artistic creations displaying a wide variety of colours, picture presentations and narrative scenes on the pot engravings of the mid-Cycladic period symbolise the advancement of the great painting that would come to decorate the walls of buildings with scenes from the life of the town during the next and final part of the period (late Cycladic 1).

The tremendous volcanic explosion of the middle of the 17th century B.C., together with its consequences that affected the entire Mediterranean, suddenly broke the course of life for the people of Thera as it completely buried the island under a thick layer of volcanic deposits. However, it was thanks to this explosion that a final snapshot of the advanced course of a four thousand year old unique civilisation was preserved.

An aspect that reveals the liberal character and somewhat “town” mentality of the society of Akrotiri more than any other is the extensive use and development of art. Not even one of the buildings that have been uncovered up until now lacks wall painting decoration in at least one of its rooms. It is as if the new town had been transformed into a huge laboratory where patrons and artists competed against each other to see who could best portray their social position on the one hand, and their artistic talent on the other hand. Moreover, one can interpret the large variety of subject matter, and in particular the depiction of exotic places with unknown animals and plants in the environment of the Aegean, as another source of rivalry amongst the widely travelled seamen of Akrotiri. Nowhere else in the Aegean can one witness similar competition.

Nevertheless, the town of Akrotiri had become a cosmopolitan merchant harbour just as the exotic objects that have emerged from its ruins confirm. The rich and widely travelled seamen competed with each other in decorating their homes with wall paintings with subject matters that portrayed their own identity. The exotic places with the flora and fauna that was unknown in the Aegean inspired admiration amongst craftsmen and manual workers of the land whilst simultaneously were raising the prestige of those who contributed to the town’s wealth, of the merchants and of the seamen. However, this wealth gradually transformed the character of the town’s inhabitants. Any archaeologist who delves into the ruins of the town has the feeling that he is witnessing the history of a consumer society. 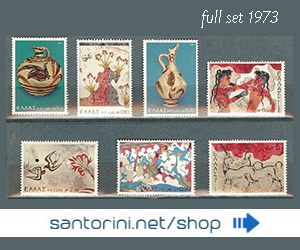