The City of Ancient Thera 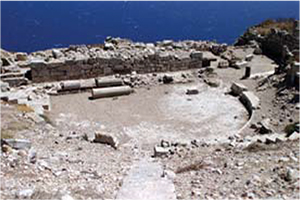 In the early of eighth century B.C. when Dorieis colonists arrived in the island, possibly Spartiates, with their leader Theras, founded the settlement which took their leader’s name in the steep, embattled peak of Mesa Vouno, which is a hill (385 meters) that belongs to the pre volcano core of the island and predominates in its southeastern end. Cobbled streets in Sellada’s slopes, the sol that unites the hill with the mountainous bulge of Prophet Elias in the northwest, were connecting the city with the coastal territories in the foothill of Mesa Vouno where its seaport settlements Oia in the north (Kamari) and Eleysis in the south (Perissa) were founded. Today, Sellada offers once again the access to the archaeological site (road from Kamari – pathways).

The city was inhabitable for more than thousand years and was the administrative and religious centre of the city-state of Thera, which was consisted of six more settlements. The city met a particular construction development during the Hellenistic period, a time when Thera was conquered by the dynasty of Ptolemaios, King of Egypt because of its strategic position in the Aegean. From the 3rd century A.C. the city is being gradually abandoned and in the early Christian times the city is no longer at its peak, but it is still inhabitable. In the 8th century the city offers settler to the residents of the seaport settlements from the Arabs’ invasions, where they started knocking up settlers among the ruined buildings of the city with construction materials from the ancient buildings. 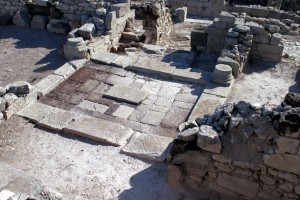 Even if the continuous inhabitancy ruined the majority of the remains of the early periods, the city was excavated in great extent by German scientists under Hiller von Gaertringen (1896-1902) supervision and gives a complete picture of its shape and organization during the Hellenistic and Roman period, while the number of the inscriptions and mobile findings discovered in the city and in its cemeteries – many of them are exhibits in the Archaeological Museum of Fira – are the main source of information for the island’s history in ancient times.

The city which is built 320 meters above sea level has a central road that runs through it (North/Northwest-Southeast) and holds the elongate line of the hill. Its core develops in consecutive embankments on the smoother east side while the ends and the steep points of the line host mostly worship places. The construction of strong footholds the one after the other and the frequent use of the offered rock manifest the efforts of the people to tame the inclined and rocky of its soil while the numerous underground wells, testify the solution that people had found to store water.

Public buildings, markets, stores, theatre, baths, districts with private residences, temples, sacred places and one complete road network with sewerage system constitutes the city’s picture, in which austere architectural figures prevail. The “Market of Gods” in the south side was the most important place of worship, where the sacred of Apollo Karneios, the God of Dorieis, predominated in the religious life of Thera and numerous inscriptions on the rocks preserve the most ancient pieces of the Greek Alphabet in the Aegean. 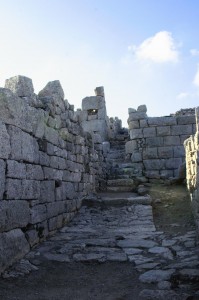 The importance of the archaeological site which had been abandoned for decades due to the lack of credits, was forced the 21st Ephorate of Prehistoric and Classical Antiquities to create the project “Configuration and Emergence of the Archeological Site of Ancient Thera”, which was included in the Peripheral Corporate Program (PCP) of South Aegean 2000-2006 and was co-sponsored from European Union by 75% and from the Greek State by 25%. The project has already accomplished its targets in the areas of enhancing and protecting the monuments, as well as in the fields of arranging and organizing the site, in informing the visitors, in organizing the archaeological site’s entrance and finally in the securing of the infrastructure basis for the services of the visitors.

As the visitors walk through the cobbled streets of the ancient city among buildings that are usually very high, they can realize its shape and its organization, know its monuments and feel the life of its residents, enjoying at the same time the magnificent view to the Aegean.

* Maja Efstathiou, Archaeologist in the 21st Ephorate of Prehistoric and Classical Antiquities, Ministry of Culture